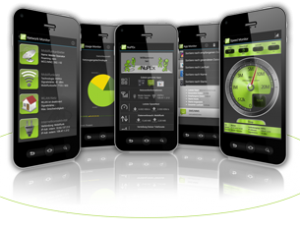 Through the more and more digitized society, a reliable communication infrastructure is indispensable. In the meantime, a stable broadband connection is not only important for business customers, but also contributes to our daily lives – whether for cloud computing, video conferencing, IPTV or interactive games. Today’s networks do not differ in the quality of service and are designed with an average data rate per user. This is not optimal, since not every user per area has the same need. Therefore, it is important to make the network expansion more efficient in such a way that it takes account of the customer’s behavior and expectation, and at the same time checks whether this is also implemented. In this way, the resources can be aligned more precisely to the specific needs of the customers and costs can be saved. The optimal state can be derived from the quality of service (QoS) that can be measured in the network and the quality of experience (QoE), which is experienced by the user. When these values ​​are adjusted, a network planning and optimization can be applied which is adapted to the users. Efficient planning functions are extracted from the research results and integrated into commercial software for the planning of telecommunications networks. Network designers are thus given the opportunity to apply the latest research results directly to the optimization of resource use and to provide their customers with optimal bandwidths with better quality of experience with the same resources. Both, networks and users benefit from this.

This project was supported by the Federal Ministry of Education and Research.

The approaches of the project were implemented in a free app for the users. The app can track the use of other apps on the Android device as well as network information, speed, data traffic, and phone behavior. With this app, users were able to express their satisfaction with the quality of service within a campaign.

For 5 months, the app users have also participated in this quality test study and supported the project with their feedback. More than 22,000 telephone calls and 40,000 app uses were recorded and analyzed anonymously. Additional screening questions and assessments of speed complete the data base. Some interesting results were recorded:

“WhatsApp” was the most widely used app on German smartphones. Rank two and three went to the contact information and the internet browser. Only in fourth place of the most used apps was Facebook. These and other interesting information, such as the average duration of video streaming per day, the spreading of flat rates, the most frequently used mobile networks, or even the satisfaction of customers from different telecom providers, was determined using the NuPEx app as part of the campaign.